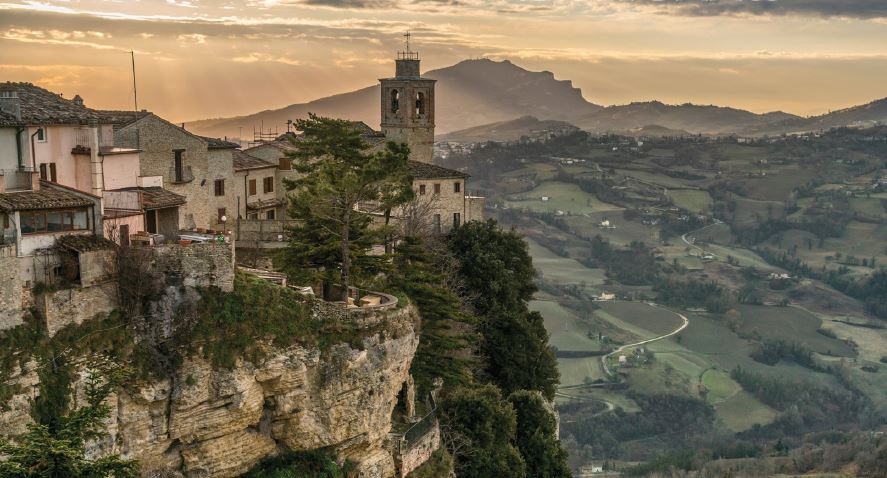 At the newspaper stand here in Italy you can find the new issue of WhyMarche, where we propose, with our section, a path for romantics, for photographers or mere observers, a wonderful tour in some remarkable towns between belvederes and nature balconies!

Whether in summer, in winter, in spring or autumn, whether on the beach or in the mountains, from north to south of the Marche, the region gives us a variety of landscape panoramas and interesting places where you can let the mind run free and fully capture the peculiarity of the places.

Through this itinerary you will be surprised to discover what a tremendous wealth this region has in itself: recommended for photo tours, but also for those who want to observe the flora and fauna of the area through a fascinating and exciting naturalistic experience, or for Sports fans and outdoor activities.

Pietrarubbia in the Montefeltro (PU)

Renaissance landscapes from the castle

In the high Montefeltro in the province of Pesaro-Urbino is the village of Pietrarubbia, recently renovated by the sculptor Arnaldo Pomodoro. The Pietrarubbia castle is an ancient property of Montefeltro and its ruins cling to a rock spur whose reddish color gave it the name “petra rubra” (red earth).

The history of the area, an old mining center, takes visitors back in ancient times to meet people from distant eras and old blacksmiths who served the Dukes of Urbino. In front of the Pietrarubbia Castle on a rocky and steep area, with a fantastic landscape, stands the ancient romanesque church of St. Arduino, where there is an iodine-salt-bromine water source.

In the village there is the monastery of the Capuchins, where the “flying monk” lived: St. Joseph of Copertino. The church of S. Silvestro from the 15th century, with precious marble altar and the bronze rosette is worth a visit. Pietrarubbia is considered one of the most beautiful villages of the Marche, embedded in the rocks and located on the hills, which give the place the charm of fascinating panoramic views.

The gentle hills of the Marche

Cingoli, a town in the province of Macerata, at the foot of Mount Circe, has always been known as the “Balcony of the Marche” for its wide horizons with enchanting views. From the Adriatic Sea to Monte Conero and, on clear days, the view can reach as far as the Sibillini Mountains and the Dalmatian coasts. The panoramic terrace is located on the castle wall. Its territory is ideal for exploring nature trails rich in flora and fauna. Noteworthy is the view of the lake of Cingoli or Castreccioni, the largest artificial basin of the Marche.

Cingoli, which is quite high above sea level, is the ideal place for winter visitors, especially when covered in white snow blankets, for those looking for emotions. Among the picturesque medieval streets and historical sites of the village, the Romanesque-Gothic church of the convent of Sant’Esuperanzio, which has converted many pagans and heretics, and the magnificent Palazzo Cina della Scala, home of a famous noble family. Noteworthy are the Maltempo fountain and the Cassero, a fortress in which a prison was located.

The most likely hypothesis is that Monte Conero takes its name from a shrub of the Mediterranean macchia: the strawberry tree (corbezzolo), from which an excellent rosé wine and honey are made. Seen from the sea, the mountain has a majestic appearance because of its overhangs and the many paths. On the promontory there is the Natural Park Conero, which is accessible through narrow paths that invite to discover the flora and fauna of the area.

The particularity of the promontory has, over time, contributed to the emergence of many legends, all of which are connected with tragic events, which is why the mountain is called “the Conero of Secrets”. The promontory stretches over the town of Ancona, Sirolo, Numana, Camerano tends, due to the erosion of the waves, with steep slopes towards the sea, and much gentler towards the hinterland. The highest part is covered by forest, around it are several hills, and the hamlet Poggio lies on one of them. When going down we find other hills with areas like Montacuto and Varano.

Looking west to the Sibillini

Montefalcone Appennino, a village in the province of Fermo, perched on a high rock, formed by a 4 million year old rock spur, which therefore represents its dominant feature. It offers a panorama of incomparable beauty that stretches across the entire chain of Monti Sibillini. The location in the middle of nature makes it an enchanting place: Particularly interesting is the Tronelli garden, where meandering paths with plants of various species meander in the middle of nature, along the cliff.

The castle Farfense, characterized by a single tower, rises in all its beauty on the upper part of the country, and from here, on clear days, it is possible to enjoy breathtaking landscapes. In October, the streets of the city are livened up by street artists and markets with typical and artisanal products: this is the most popular opportunity to enjoy the spectacular views that the country offers, especially for photography lovers.

The Middle Ages on the sea

Cupra Marittima is a town whose origins have been lost over time. It has a Romanesque past, still visible in the architectural structures. Destroyed in the ninth century, it was rebuilt at its present location in the Middle Ages, and named Castrum Maranum, which later became Marano. It is a city with an enchanting view that disappears on the horizon of the beautiful Adriatic below, whose shoreline is shaded by palm trees and colorfully painted by oleanders. Marano is indeed the heart of the country, that rises above the sea.

Equally suggestive are the ruins of the castle of S. Andrea, also overlooking the sea. It has an archaeological park, where you can admire numerous artifacts from the excavations and remains of the ancient temple dedicated to the goddess Cupra. Numerous churches, located in the upper part of Cupra, where the Romanesque craftsmanship is expressed, bear witness to so much history. Ancient palaces, towers full of history and suggestive lanes with flourishing balconies emphasize the beauty of this enchanting place.