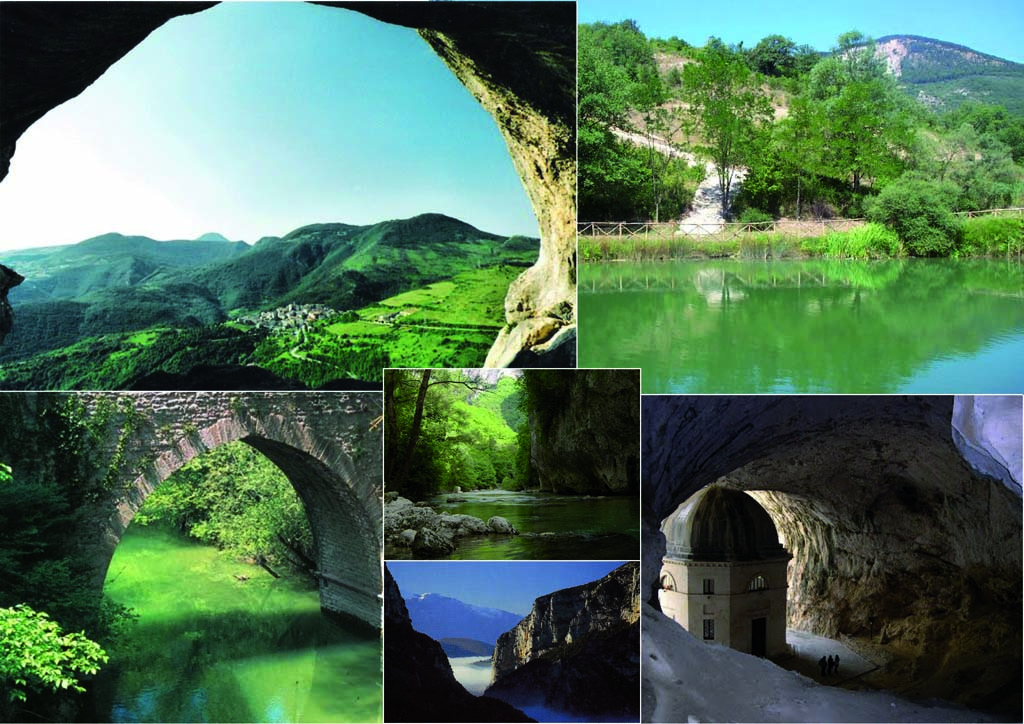 Guide to the Gola della Rossa Natural Park in the Marche region that is among the enchanted Grotte (Caves), ancient medieval churches and breathtaking views between the green and the rocks.

The Gola della Rossa Regional Natural Park and Frasassi is the green heart of the Marche. One of the most beautiful protected areas that covers about nine thousand hectares of the Apennines in the province of Ancona affecting Serra San Quirico, Genga, Arcevia and Fabriano municipalities. This is an area surrounded by luxuriant nature among the beautiful and mysterious Frasassi Grotte (Caves), ancient medieval churches and abbeys with a fantastic landscapes.

Frasassi Grotte (Caves) are underground and karst caves. They are in the Genga territory and they represent a true time and nature show. The Caves can be visited with guided tours or free, they are made of stalactites and stalagmites that form sculptures of outstanding natural beauty. The shapes and dimensions of these natural works have stimulated the speleologists imagination, who have discovered and studied these rocks and they have called them in a curious way. The most famous and fascinating stalactites and stalagmites are: the “Giants”, the “Camel”, the “Dromedary”, the ‘”Bear” and the “Virgin”.

The area associated with the San Vittore di Genga Church is another place of particular historical art and touristic interest with a beautiful landscape, with its adventure park designed and developed to entertain the children and the nearby SPA. The San Vittore Resort has become a meeting place for families, where it is possible to find relax and amusement too. The San Vittore delle Chiuse Abbey was born in a natural amphitheater formed by the mountains and with its Romanesque style. It is a place of strong impact to the noise and the austerity of the high walls, a prayer place too charming in the green mountains.

Pierosara is a Genga suburb, with a strategic geographical position. It was located on a hill closet o two grooves, Frasassi and Rossa. Moreover, it was an important medieval castle that dominated the surronding territory. Today, about the ancient castrum remains the walls and the tower defense. Historically, it was always very important and it was also a strategic hub for the domain of the surrounding lands since the Roman Empire. The curious name of this medieval village originally called Castel Petroso comes from a legend. It is said that, a Count met a girl named Sara who lived in Castel Petroso and he was fascinated to her beauty. So, he decided to kidnap her because he was betrothed to another man named Piero. During the kidnapping attempt, local residents tried to save the young girl, but the Count killed both the young Sara and Piero. It seems that from that day, Castel Petroso has assumed the name of Pierosara to remember this sad event.

Sassoferrato is a small town compared to its size. The town is on two levels: the Old town district and the Castle district. The municipal extension is enclosed in a valley flowing three streams: the Sanguerone from the North, the Sentino from the West and the Marena from the South, that gather in the village a short distance from each other. In Sassoferrato territory, there are many places of historic and artistic interest such as the ancient Roman city of Sentinum, the home of the famous Nations Battle (295 c.a.). The archaeological museum and the civic art gallery housing one of the most important icons depicting St. Demetrius built in the late XIV century that is characterized by its small size and technique construction.

In addition to its famous Grotte (Caves), Genga has many interesting places, historical and worship buildings as San Vittore delle Chiuse Church, Valadier Temple and Santa Maria infra saxa Hermitage. Besides, there are landscaped and equipped areas suitable for walking or picnic in the green Apennines close to the Esino and Sentino rivers. The famous Nativity scene is beautiful and each year it attracts more and more visitors.