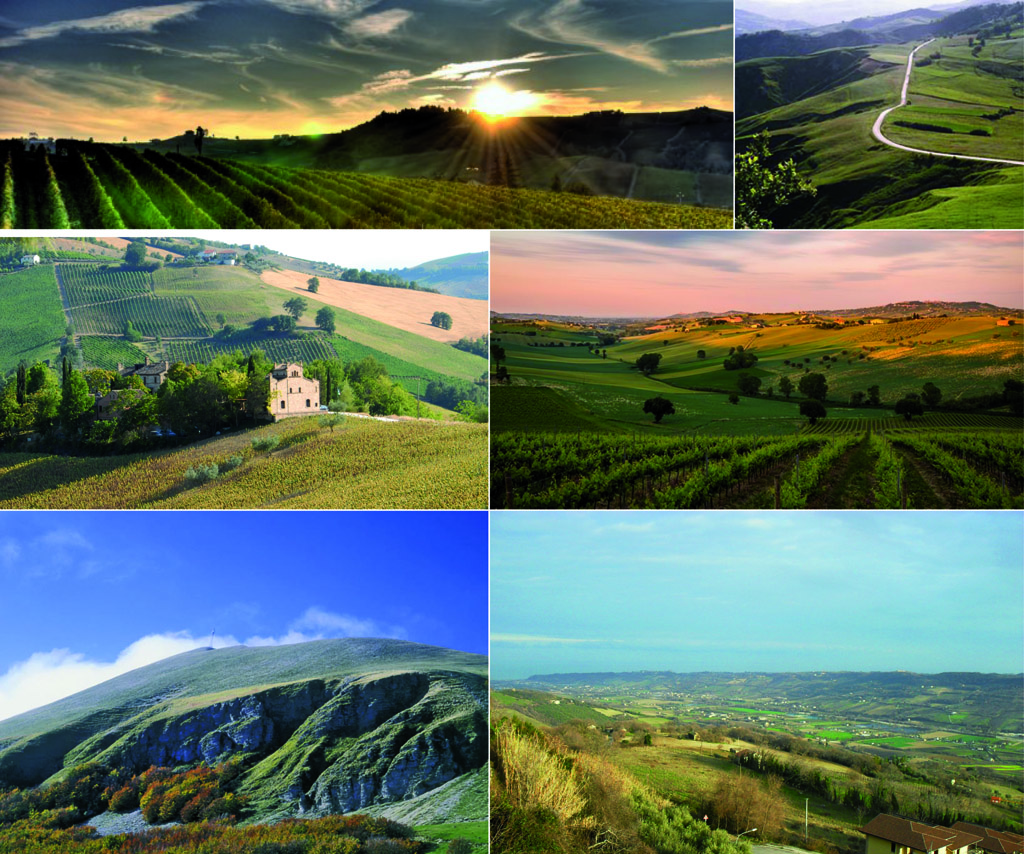 Where to have an holiday in Marches choosing its sweet and green hills, its villages and ideal areas.

Chose the marchigiano’s area means to have available an immensity of possibility and of sceneries,from the sea to the mountain, from the exquisite seaside to the peaks covered with snow, a multi-colored mosaic of colours, of fragrances, of traditions to taste and live. Magic places are waiting the visitor who will choise to go through the sweet hills and wide valley, to follow the flow of rivers and torrents, to stay in peculiar villages from the aspect old and comfortable, to allow to snuggle by the kindly nature and its colours, from the green of woods and from the mountain’s blue background. Choose the hinterland hill of Marches means choose a place rich of history, culture, traditions where you could still immerse in nature. It is not only possible but also an unique and unforgettable experience.

There are a lot of ideal areas where to have a magnificent resort, choosing between relax and fun, betweet culture and sport, between nature and splendid small town from the unusual and unexpected charm. One of this is the Vallesina’s area collocated almost at the Marches center. The area tooks its name from the river wich is crossed, Esino, one of the most importants region’s rivers which born, in the province of Macerata, from the layer of Cafaggio’s mount. The Vallesina is dominated by the shape of the San Vicino mount and it developes through the river’s middle flow, from Serra San Quirico to the mouth at Rocca Priora in Falconara Marittima’s municipality, in the province of Ancona. The valley presents itself closed by the hills that downgrade towards Adriatic sea sprinkled by villages and small town castled on the summit which creates a delicious play of landscape and a suggestive imaginary way in the history. The peculiarity of this area – where the splendid city of Jesi is the undiscussed main character – is the series of wall up villages in perfect state of preservation which stretches on the hills, the well-known Jesi’s castles famous, not only for the beauty of medieval castrum of the high city walls or the severe Romaesque churches and abbey, but also appreciated for the production of the great vine variety Italy’s native, harmonious and dry Verdicchio.

Another area to discover and to live is that of Montefeltro, historic region of Marches situated at  north of the province of Pesaro Urbino. The area presents itself mainly mountainous and hill with wooded valleys which interrupts itselves in sudden cliffs very panoramics with a fascinating and sublime aspect. The Montefeltro, which of its marvellouse ambiental caracteristics, host also the National Park of Sasso Simone and Simoncello, it’s a very important historic-cultural area which is situated in the extraordinary Urbino. One of the most important places of the Italian Renaissance and environmental heritage of the Unesco, Urbino was make similar from the diplomatic and mercenary captain, evaluator of art and culture, Federico, sir of the city from 1444 to 1482 and its court was made by extraordinary men and artists such as Piero della Francesca. All the territory is characterized by a sequence of rocks and castles which stand out on the hills’ summit and on the rocky spurs which dominating the underlaying valley; between the most interesting, the castle of Belforte all’Isauro, which shows the signature of the sienese architect who for a long time sojourn in these areas, Francesco di Giorgio Martini who tooks part also to the various works of urban requalification and building of the city of Urbino and also to the conclusion of the Palazzo Ducale. Also by Martini is the peculiar Rocca di Sassocorvaro with the majestic turtle shape, while the fortify building of princes Carpegna-Falconieri show suggestive in the gorgeous village of Carpegna, and the count Petrangolini’s castle in Tavoleto.

In the territory of Ascoli a wide and mervelouse area is the one which follow the flow of the river which born in the municipality of Montemonaco, between the Porche mount and the Cima del Prata, to flow into the Adriatic sea in Pedaso. The Aso’s valley is a place of history and folk traditions, of thousand colours which goes from the strong green shade of fields, deep woods, orchards, vineyards with the suffused charm of blue violet of Sibillini mount which frame the background between downgrade hills and thousand farmhouses. During the Aso’s flow, which separates the area – between the province of Ascoli Piceno, on the right, and the one of Fermo on the other side, which unknots for around 60 Km alongside the valley, we meet the biggest artificial basin in the area, the Lake of Gerosa and also, villages with old charm which whisper their story made of local festival and hard work in fields, of old tastes and fragrances which are still part of the life of inhabitants, in the silence and in the perfect  musicality of nature. Strongholds and castles, town walls, romanesque churches and also, theaters, squares and alleys, mill and old comfortable farmhouses in their rustic semplicity narrates an authentic territory, leaveable agreeably in every season of the year able to give suggestions and scenaries almost unreal.

Between the hills which surround Ancona behind the Monte Conero’s back, an old area, marked by the Esino river and by the high Musone, the Terra dei Castelli, which consist of a fairy tale landscape between typicalness culinary and thousand-year-old traditions. An history made of old rivalry and hard profession conducted with dedication and wisdom by a proud, strong and combative population. The castles, that is the enchanting strengthen village of Offagna, Agugliano, Polverigi and Santa Maria Nuova, which, in medieval period, were built to protect and defend the doric city, today represents an oasis of serenity between the green hills and the sweet slope which alternate to the sea. Buildings with an austere charm, typicalness culinary and historical reconstruction coexist in sinergy with a lush nature with its sparkling colours and inebriating fragrances.