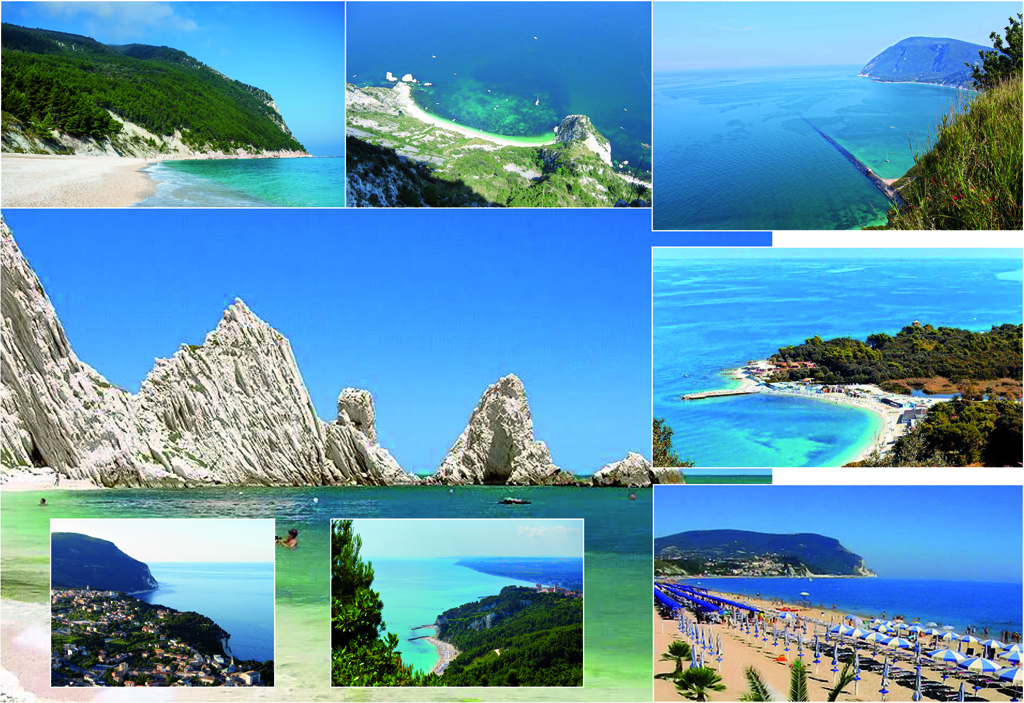 Have your holidays between the villages and scenery of Parco del Conero, between cliffs and bays you will discover the authentic beauty of Marche.

Unique glimpses and panorama, cliffs, hills, steep slopes, a coast with white stones, woods, hills of Mediterranean scrub and a story, which between legend and reality, looses itself in the night of times : this and more in the Regional Natural Park of Conero. A piece of nature and mankind, where a mount overhanging on the sea, the Conero, committed to the crystal clear blue of the Adriatic sea embracing four pearls which gorgeously appear on the sea. Extended for about six thousand hectares, the Park in fact included great part of the territory of Ancona and of Sirolo, Camerano and Numana, beautiful villages main characters of an old story.

Ancona was founded by Greeks of Siracusa in 387 B.C., which name comes from its particular form of the promontory with bended elbow. Ankòn in fact in Greek means “elbow”, while the name Conero means “mount of corbezzoli”, owed its name to this little trees with red fruits evidently very common on this mount. A city rich of history and traditions which shows and important past through its monuments; from the Arch of Traiano, built in the II century B.C., to the Romanic Cathedral of San Ciriaco majestically pushed out on the sea, from the eighteen-century Mole Vanvitelliana, to Piazza del Plebiscito. Ancona is myriad of streets, squares, very interesting monuments, it is history, art, culture, but also nature thanks to the Park of Cardeto, to the walking, to the breath-taking panorama and to the unexpected glimpses on the sea and on the green hills.

In the area you can find also the splendid bay of Portonovo with the church of Santa Maria, white magnificence mounted in the green of the Mediterranean scrub. The Tower of Guardia, was built from the Pope Clemente XI in 1716 to avoid the incursions of pirates and smuggler. The Fortino Napoleonico was built in 1808 to avoid the docking of British.

Also the enchanting Camerano praises two aspects in perfect harmony between them, one is naturalistic, the other one is historic-artistic. The Castle of Camerano was born as a Romanic establishment around the VII century B.C., then in 1177 became Castle of Camerano and then, in 1198 became and independent village. Between its beauty and peculiarity you can find a series of caves dug in the subsoil. They had many functions, form simple places of the conservation of provisions to places clearly religiously, furthermore, they had been also used as a refuge for the population during the incursions in Middle Age.

Sirolo is the pearl of Adriatic sea, where a characteristic medieval village rises up on a cliff. Crystal clear water, caves, inlets, wild beaches and naturalistic scenery with an unusual charm framed this village inhabited since the stone age. It has an important past due to the discovery of the “Tomba della Regina”. Sirolo is loved and appreciated above all for its beaches. Between them, there is the “Black Stone” beach, which is the well-known in the area and the most naturalistic. Then we have the “Two Sister” beach, with its steak symbol of the city.

Numana rises up on a cliff. It is an old city made of alleys, the Tower, the Palazzo Vescovile, headquarter of the town hall, and then the Church which safeguard the crucified Christ abandoned by Carlo Magno. The lower part is dedicated to tourism with the marvellous bays and beaches and many accommodation facilities. It has a great history which you can consult also through the Antiquarium where are exposed the different grave goods and the different Romanic grave.