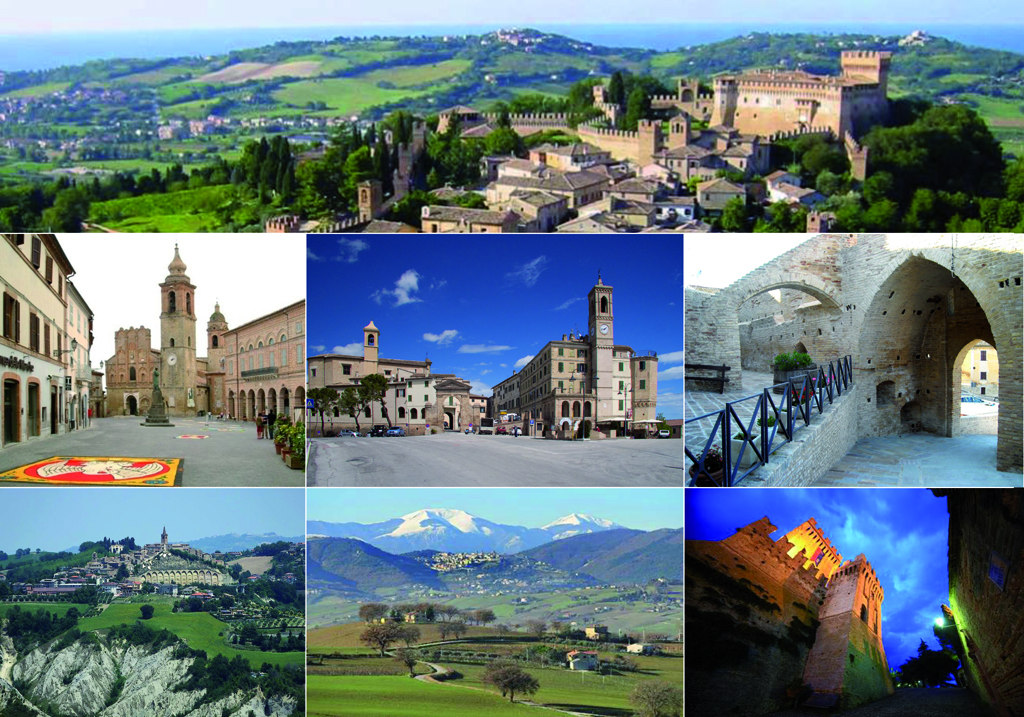 A selection of the most beautiful villages of the Marche where you can spend a fairytale vacation.

Marche is a region in Italy increasingly chosen as a tourist destination. More and more visitors choose to explore the inland villages for the holidays in the Marche region, an area dotted with beautiful villages perched on hills or slopes overlooking the sea or protected from the high mountains. Fascinating corners of history and tradition, art and folklore that welcome tourists with their breathing and almost magical atmosphere. Ancient countries, fortresses, castles, villages, mysterious monasteries, landscapes and unique and spectacular scenery make the tourists’ stay an exciting and enjoyable experience.

Starting from the northern part of the Marche, the wonderful Gradara, close to the sea, located on a beautiful landscape made of hills, famous for its Malatesta Fortress where the two famous lovers Paolo and Francesca praised in the Divine Comedy were killed.

In the area of ​​Montefeltro, there are many interesting villages that will turn your stay into an unforgettable holiday. Among them, the delightful Borgo Pace, quiet mountain village where you meet the two rivers, the Meta and Auro, which merged create the longest river of Marche, the Metauro. Carpegna, famous for the production of tasty ham, is the hub of the Regional Natural Park of Sasso Simone and Simoncello. A territory immersed in nature, among woods and trails of noble origins and ancient history, to be experienced in its paths. Sassocorvaro stands on a hill overlooking the valley of the river Foglia and is organized around the Rocca Ubaldinesca, a fortress belonging to the brother of the Duke of Montefeltro built by Francesco di Giorgio Martini around 1475. Pian di Meleto is a small village as well involved the regional Natural Park of Sasso Simone and Simoncello where nature and the discreet hospitality of the inhabitants will be able to make your stay very relaxing. Macerata Feltria, about fifty kilometers from the sea, boasts a beautiful, hilly landscape that contributes greatly to the atmosphere of peace and quiet that reigns in this village rich in history and traditions to be discovered. Medieval origins lay behind the town of Fossombrone, perched on the slopes of a hill, dominated by the Citadella and the remains of the ancient fortress, here, tourists will be amazed by fabulous and unexpected scenarios offered by nature and by man who built over time buildings of great historical and artistic value.

In the area of Senigallia and Arcevia, located in the north of Ancona, you may find the beautiful village of Morro d’Alba, happily known for producing delicious red wine, Lacrima di Morro d’Alba. Standing on the hills, the town itself shown an ancient history in complete harmony with the surrounding area. Arcevia, watershed between the countryside of Marche and the mountains of the Apennines in the west, is historically an important point for trade and very interesting from an architectural point of view. In the hinterland of Senigallia, on top of a hill, on the left bank of the river Nevola, it is Corinaldo, with its walls, the most intact and impressive fortified lengthiest in the region. With a top notch enogastronomical tradition and so many scenic and architectural attractions, it is increasingly being chosen as the venue for a relaxing and exciting stay. From Mondavio you may perfectly see Mount Catria and Nerone, where ancient history is in perfect match with the traditions, thus originating an extraordinary scenery of civilians and interesting religious buildings.

Wonderful thing to discover during you holidays in the Marches is also Offagna – with its ancient fortress on the top of a hill inland from Ancona – and Osimo, which stands on two adjacent hills, where the fascinating Cathedral of San Leopardo dominates the town, one of the finest examples of Romanesque-Gothic architecture of the Marche. Agugliano was one of the many castles built to protect the city of Ancona during the Middle Ages as well as Polverigi that has always occupied an area dedicated to agriculture. And again, Serra San Quirico that in a purely medieval setting is home to the fascinating and spectacular baroque church of Saint Lucia, and San Marcello is a lovely town to visit and to enjoy through its many typical food and especially wine.

Between Macerata and Fermo several villages are particularly interesting. Urbisaglia rises on the hill San Biagio, boasts the Regional Archaeological Park of Urbs Salvia, recognized as the most important and spectacular Roman site of the Marches, while the small village of Fiastra is attractive especially for the lake Fiastra whose banks offer many entertainment facilities such as fishing or navigating by boat. In Moresco, in the province of Fermo, which stands on top of a hill dominating the underlying valley of the river Aso, you may find  everal attractions that bring every year more and more tourists. First of all the Heptagonal Tower dating back to 1100. San Ginesio in the heart of the Sibillini Mountains, is extremely unusual from the architectural point of view thanks to the mixture of different styles, from Romanesque to Gothic to the unique presence of its elements of northern Europe. Pievebovigliana, surrounded by the green hills, was an ancient Roman settlement, passage of Umbria between the fertile plains and the first mountain pastures of the Sibillini, an extraordinary village for those seeking an oasis of peace and unspoiled landscapes; Campofilone, known for the delicious macaroni, is a small medieval village with several buildings of civil or religious character very interesting as the St. Bartholomew church with the abbey garden. In Petritoli, tourists will visit the charming old town, the nineteenth-century civic tower and be fascinated by the traditions of a small authentic village and benevolent nature.

In the area of Piceno, the charming Montegallo, located on the slopes of Mount Vettore, in the heart of the Sibillini, a medieval town and a landscape surrounded by nature, as well as the magical village of Venarotta, halfway between the beaches of San Benedetto del Tronto and the spectacular natural Park of Monti Sibillini. Here predominate the colors of the nature: the blue of the sky to the many shades of green hills and forests. Roccafluvione has its particular name to several castles scattered throughout the territory of the Fluvione stream and is a delightful little mountain village where it is easy to get lost in the calm of a dreamlike nature. From Palmiano, famous for the Potato Festival, one can observe large and beautiful scenery, from the Sibillini to the valley of the Tronto, an immensity of hills, woods and tenements create a truly fascinating panorama. Castignano, whose name recalls a big chestnut wood still visible in its territory, is located on the slopes of Mount Ascensione, a quiet medieval village nestled in the Sibillini to retreat to immerse yourself in the breathtaking scenery. Arquata del Tronto is located between two protected areas, the National Park of Gran Sasso and Monti della Laga and Monti Sibillini National Park, steep slopes and dense forests make for a very scenic countryside as well as various places of interest, such as the ancient fortress of 1300. Appignano del Tronto, on a hilly ridge, is characterized by the presence of gullies but also very interesting monuments such as the St. John the Baptist church that houses a painting by Simone de Magistris. Acquasanta Terme in the countryside, between high hills and mountains, is a small village much appreciated and increasingly a destination for many tourists not only for its quiet location but also the different sources of sulphurous water used in the comfortable spa complex. And again, Montemonaco, departure point for exploring the Sibillini, has a unique charm and mystery linked to the Sybil myth that just in this area would have lived in the mists of time; Montefortino, embraced the Sibillini, boasts many magical places and deeply evocative as the sanctuary of Madonna dell’Ambro and extraordinary and mysterious dell’Infernaccio Gorges. Offida however is extremely interesting from a cultural point of view: from the ancient walls of the city hall to the various churches, and a unique artistic heritage to be discovered.