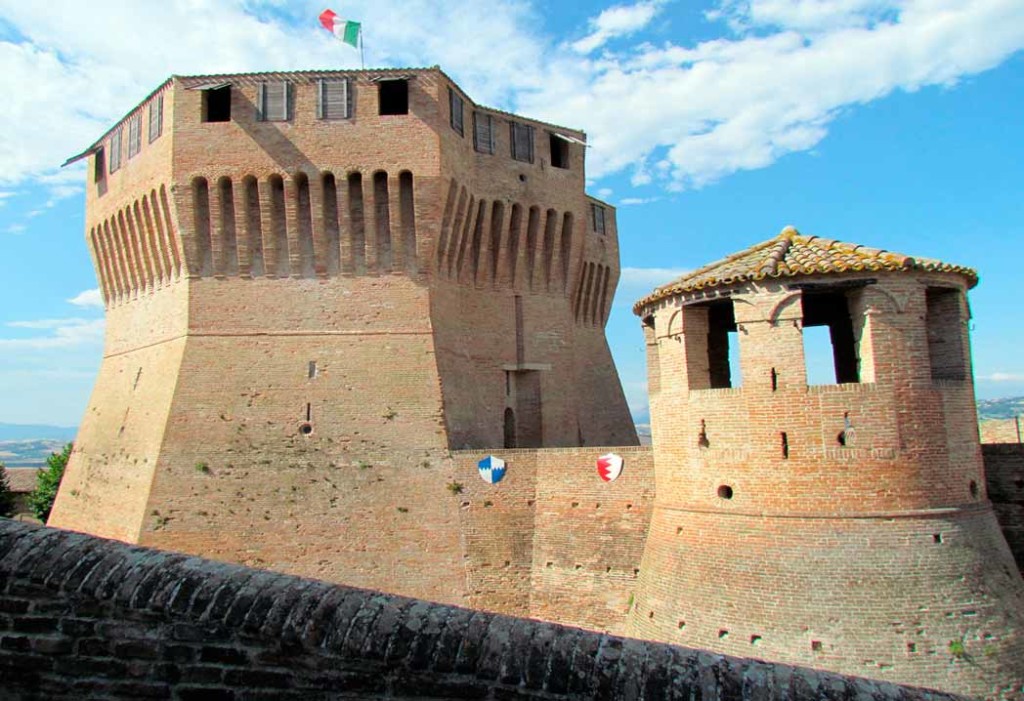 Let’s discover one of the symbols of the province of Pesaro and Urbino.

The small village of Mondavio lies above 280 meters above sea level in the province of Pesaro and Urbino. It is located 20 kilometers away from the sea and stands on a hill from which you can see the surrounding mountains. Its story is very important: in fact, the first document proving its existence dates back to 1778. It’s also said that St. Francis visited the village. However, today we will write about one of its most important monuments: the Rocca Roveresca.

The Rocca Roveresca is the symbol of the village of Mondavio. It was designed and built between 1482 and 1492 by the architect Francesco Di Giorgio Martini for Giovanni Della Rovere in order to protect the vicarage at a time of dangerous threats. Since the architect came back to his home town Siena and both the architect Martini and the customer died, the construction hasn’t been completed.

The Fortress is particularly impressive for its octagon shape with a large base designed to withstand the bullets’ impact. The fortification is made of a five-floors “fortified tower” and a semicircular “tower”. The first is only accessible by overcoming a series of passive defenses: the moat, the walls, the upstream and the downstream drawbridge, the door under the tower, the little tower outpost on the flight and the drawbridge at the entrance of the fortified tower. Some floors are equipped with gunnery stations and embrasures: on the ground floor for the grazing shot, on the third floor for the middle shot and on the fifth, crenelated, for the long shot and for the visual control over the territory. A pentagonal building to house the troops was designed to be built on the right of the flight.

On the inside there are narrow passes, vaulted-covered environments, tunnels and curvy stairs. Moreover, on the inside of the Fortress there is the Museo delle Armi and the Museo di Rievocazione (weapons museum and re-enactment museum) which is composed of waxworks representing typical scenes of the time.

From the relief depicting the Rocca Roveresca in section we know that the rests of a mediaeval tower have been incorporated in the new building. The architect Martini modified the original path and adapted it for the fortification’s defense; he made a new communication trench between the defensive tower and the fortified tower which still exists today. He also created a defense system to guard the old town, integrating, expanding and adapting the preexisting fortification in order to make it suitable for his project. In order to meet the defense’s need every element was located at the most convenient place so that the defense was effective from the general to the particular.

In 1631, after the death of the last duke of Urbino, the fortress of Mondavio has been turned in pontifical prison and remained like this until the 1940s of last century.

Visiting the Fortress of Mondavio means not only travelling to discover every strategy of defense from enemies, but also admiring the majesty which the building was built with in order to look as much imposing as possible in the eyes of every rival.