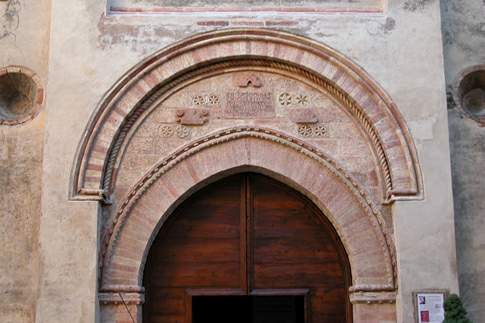 Among the many places of worship in the Marche region there is also a small wonder, the Sanctuary of Santissimo Crocifisso, in Ostra.

According to an inscription on the portal, the Sanctuary , was built in 1333 and defined earlier the Church of St. Gregorio, since it shows the altar dedicated to the Pope.

The structure is designed in a Gothic style, only in 1343 was added a small bell-tower for which were given to the two bells.

In the course of the centuries it suffered various modifications, including the addition in the NINETEENTH Century of the two huge windows on the facade, and in 1860 the name of the Sanctuary of Santissimo Crocifisso by the Bishop of Senigallia.

The building is situated on the main street of Ostra; it overlooks a recess and inside it is rich of decorations of the baroque.

There are also the beauties of the furniture inside, including an organ adorned by a canopy, and various paints.

Among the works preserved there is also the agonizing Christ of Bartolomeo Silvestri from Verucchio, a very expressive wooden sculpture, typical of the baroque age.